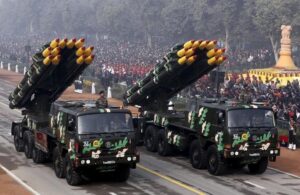 While there has been an overall increase in allocation, this is most likely money that went unspent in last year’s defence budget. This is indicative of systemic inefficiencies in the capital acquisition process.

Over the past few months the major ask for defence in the 2017-18 budget has been for an increase in allocations. This year, finance minister Arun Jaitley has accommodated these requests and increased the overall allocation by 10% compared to last year (from Rs 2,48,005 crores in 2016-17 to Rs 2,74,114 crores in 2017-18). The obvious question is where this 10% increase is allocated within the budget heads under defence. However, before this, we must ask whether India’s defence allocation is adequate.

As a percentage of GDP, defence spending seems to have decreased in the last six years, particularly so since last year. This could be for two reasons. One, as the GDP base has increased, India’s defence spending has not risen concomitantly. Two, beginning last year, defence pensions have been categorised under a separate head, resulting in a whole percentage point decrease in the defence spend to GDP ratio. 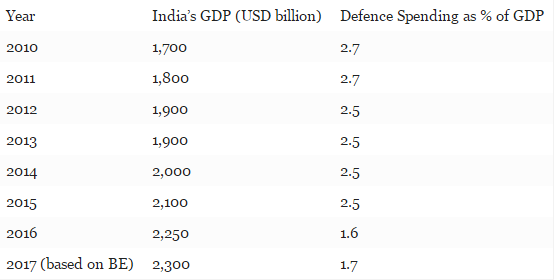 This year’s budget had two announcements that could foreseeably impact defence acquisitions and production. The first is the increase in allocation. The second is the policy fillip given to the small and medium enterprise (SME) sector. This we know, indigenisation of defence manufacturing can occur on the back of a thriving defence SME sector. It is hoped that the budget announcements for the SME sector will help in building their capacity.

Bearing in mind the immediate priorities of combat readiness, capital acquisitions, technological upgradations and modernisation, India will certainly need to increase her defence spending. However, data suggests that additional allocations go towards filling a bottomless pit rather than bring about any significant value for the armed forces. Despite setting aside additional funds for capital acquisition year on year, there is little reason to believe that capital acquisition and indigenisation has actually benefited from increased allocations.

Previously, the ministry of defence (MoD) used to submit eight detailed Demands for Grants to the ministry of finance (MoF). These have now been reorganised into four succinct Demands for Grants of Capital Expenditure, Revenue Expenditure, MoD Miscellaneous and Defence Pensions. The 2017-18 defence allocation of Rs 2,74,114 crores is composed of Rs 86,488.01 crores (Capital Expenditure), Rs 1,72,773.89 crores (Revenue Expenditure) and Rs 14,852.22 crores (MoD Misc).

A detailed investigation of Demand No. 21 for 2017-18 reveals that maximum underspend has been in the acquisition of either (or all) ‘Aircrafts and Aero-engines’, ‘Heavy and Medium Vehicles’ and ‘Other Equipment’. Interestingly, the average increase of around 9% in budgeted estimate for 2017-18 over the revised estimate of 2016-17 is the same as the percentage underspend for 2016-17. This could suggest that the increase in budgeted estimate for 2017-18 is probably money left over from last year’s budget. Another way of looking at this is that 2017-18 budgeted estimates have been calculated in anticipation of an average underspend of 9%. The question that one is forced to repeatedly ask is does an increase in defence allocation make any sense when systemic inefficiencies in capital acquisition continue to exist.

The reason that such inefficiencies exist could be attributed to a lack of any information on fund allocation within the armed forces and between different heads such as capital acquisitions, committed liabilities or new schemes. Furthermore there is no information on internal fund allocations to different institutions and organisations in the defence establishment. It is time for a more detailed presentation of the defence budget and monetary allocations to be included as part of the finance minister’s budget speech. Even a limited disclosure of important budget decisions in defence would go a long way in addressing long-standing concerns of the defence sector in India.

A further presentation by the Raksha Mantri (during the Budget session) providing some details of capital acquisition, modernisation, technology upgrades, indigenous manufacturing, exports and productivity of non-combat organisations would reinstate trust between government and private industry which would ease business transactions in the defence sector. This could provide the basis for a public document that states how much is being spent on indigenisation, incentivising domestic manufacture of defence equipment as well as research and development, enabling stakeholders in defence industry to know where they stand and what they can plan for, in terms of tenders, production capacity, business development and innovation. This could be helpful as a short-term measure for the next few years until a ‘rebalancing’ of the defence budget is achieved in theory and execution.

If India hopes to become combat ready in the near future she has to start by reviewing the functioning of non-combat organisations and by changing the current structure of how the defence budget is prepared and executed. This will be a first step and a necessary one towards infusing accountability into defence procurement and manufacturing processes. If the Modi government is able to bring about this change, it will be another feather in its cap towards good governance and transparency.

Nirupama Soundararajan is a Senior Fellow at Pahle India Foundation.

Dnyanada Palkar is a Senior Research Associate at Pahle Foundation.