Budget 2017 is expected to be a ‘big’ budget. With GST on the anvil and demonetisation already undertaken, the ground has been laid for the government to announce some big-bang measures for promoting investment and lifting the economy to a…

Budget 2017 is expected to be a ‘big’ budget. With GST on the anvil and demonetisation already undertaken, the ground has been laid for the government to announce some big-bang measures for promoting investment and lifting the economy to a higher growth and employment-generation trajectory. The forthcoming budget will be perhaps the last chance for the Modi government to usher in necessary reforms to stamp out corruption and the concomitant black economy. Some more reforms of the direct tax regime and the FRBM, on which a high-powered committee will have submitted its report at the end of December 2016, may also be on the anvil in this budget which will be presented amidst the turbulent global environment. These measures, which will be seen as a follow up to the large number of incremental measures across a wide range of sectors taken over the last 30 months and some bold structural reforms like the GST and demonetisation, could also yield a strong electoral lift for the NDA as it approaches the four provincial elections lined up for 2017. The forthcoming budget will surely be not an ordinary one.

The writing on the wall is that this budget will be a follow-up on the recent demonetisation exercise and, hopefully, also a major step towards the implementation of GST. The finance minister could also take advantage of the larger fiscal space available to the government as a result of the demonetisation, higher indirect tax collections and the recommendations of the Committee on FRBM to announce major increases in public capital expenditure that could trigger the tepid investment cycle of the present. In this context, the finance minister could consider the following as focus areas for the upcoming budget.

According to a PwC report, India will require investment to the tune of $1 trillion over the next seven years to meet its infrastructure and housing demand, of which approximately 70-80% of the demand will come from housing. The funding gap will be the primary challenge, and new avenues of funding like credit enhancement schemes for key projects and development of strong bond markets would be important steps for generating alternative capital. To meet the funding needs, government will need to proactively work on attracting private sector investment in this sector.

India adds nearly 1 million people every month to the workforce. All this is combined with the challenge posed by disguised unemployment in the agriculture sector and bad working conditions in the unorganised sector. According to the Economic Census, the numbers for the percentage change in employment for various key industries are not encouraging (as shown in the accompanying graphic). The only way to prepare the labour force for new jobs is intense reskilling and reimagining India’s education; without this, India’s demographic dividend is not going to be realised. The government should incentivise industries such as robot technology and futuristic cars.

India’s export growth has been lacklustre since 2012. Worse, the country is on the verge of losing its competitiveness in manufacturing. This is on account of the high logistics costs, combined with poor productivity. If this continues, then the increase in local demand will primarily benefit foreign producers and cause a trade-deficit problem. Defence and MSME sector offer some hope in terms of renewing the competitiveness of the Indian economy. 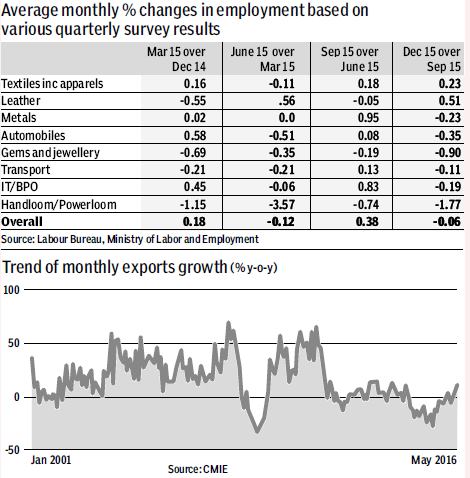 In November 2016, the government initiated demonetisation of 500- and 1,000-rupee notes to curb black money and fake currency. An important impact of this step will be on cashless payments. These will pick up, and the government will have to support this progress by incentivising e-payments. According to a government website, Electronic Transaction Aggregation and Analysis Layer (eTaal), 3.53 billion transactions were done in 2014, which almost doubled in 2015 to 6.95 billion. Given the preference of Indians for technology, this figure will increase manifold after demonetisation. Giving adequate and right incentives to companies operating in this domain will be an important signal to the world in India’s journey from developing to developed world.

With India at the cusp of a digital revolution, there is a need to provide the necessary ecosystem for this sector to flourish. Incentivising this sector will not just benefit the e-commerce companies by further accelerating their growth, but will also position India as industry-friendly and attract more investments from foreign investors which, in turn, creates a ripple effect by generating infinite employment opportunities. Introducing tax incentives for start-up employees and funding of start-ups can be some initiatives which will help this sector immensely.

With this background, Budget 2017 is an opportunity for the government to outline its priorities for the year to come.