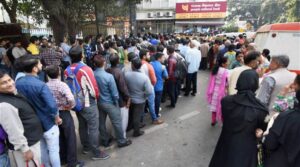 New Delhi : People standing in long queues to exchange their old Rs 500 and 1000 notes and withdraw cash from the ATM in New Delhi on Thursday.

We will state our baseline assumption first the “implementation” of the demonetization exercise, though admittedly an historically unprecedented exercise in its scale and timelines, could still have been far better. We will not get into whether the exercise was justified or not or the reasons for its failure, but focus on the institutional failure in the exercise.

On December 30 2016, the President signed the Specified Bank Notes (Cessation of Liabilities) Ordinance, 2016 which extinguished liabilities of the Reserve Bank for the currency withdrawn. From January 2 2017, the next working day post the signing of the ordinance, the RBI was not liable to exchange old notes for new. Only NRIs who can prove that they were not in the country during the 50-day period are now allowed to exchange their old currency at the RBI. On November 8 2016, the RBI had clearly said that those who are unable to exchange old notes during November 8 to December 30 2016 in banks shall be able to do the same at RBI offices till March 30, 2017. It is unclear why RBI and the incumbent Government waited till the last day to rescind the March 30, 2017 deadline. Considering that RBI released 74 notifications in the 50-day period, there is little rationale to justify this last-minute rescindment.

To add to the woes of common man, the announcement came over the new year weekend, and was absorbed only when business opened on January 2 2017. Prior to this, on November, 24 RBI had advanced the date of exchanging old currency at branches from December 30 to November 24 itself. Preponement of critical deadlines, without any reasonable explanation from the central bank, not only questions the foresight of policymakers; it also creates a trust deficit among the citizens. The Reserve Bank of India is known for exemplary policy making and execution. However, when it issued bizarre notifications such as those which mandated depositors to provide explanations for depositing old currency towards the fag end of the 50-day period, its institutional repute appeared to be on a free fall.

The demonetization drive led to an acute cash crunch. People had to wait for hours to withdraw cash. The country’s 2.2 lakh ATMs needed to be recalibrated for the new currency notes. This took more than six weeks and reportedly is still going on in rural areas. So, while people were eligible to withdraw INR 2,500 per day from the ATMs, more than 90% of the machines did not work in the first few weeks. In response to an RTI query, RBI stated that it had printed bills of INR 2,000 amounting to INR 4.95 lakh crore of currency before November 8. In light of the mayhem caused by sucking out 86% of the currency in circulation, it is worth understanding what had prevented RBI from circulating these bills into the system or was it mindful of the “top secret”.

Post the demonetization announcement, RBI disclosed data related to receipt of old currency on a daily basis. According to the last disclosure made on December 12, 2016, RBI had received INR 12.44 lakh crore. However, it abruptly stopped sharing the data when it seemed imminent that most of the approximately INR 15 lakh crore of SBNs will be returned. It followed up this decision with curbs on deposit of currency notes asking for clarification of why the notes were not deposited much before the deadline. It seemed that the RBI does not want to honor the signed commitment on each currency note. This, and many such instances have caused the many to believe, that RBI’s decisions are based on factors undisclosed or unknown. The double counting of currency argument does not hold any water because any banker can tell you that cash is accounted for every night in every bank branch. There is never any double counting if there were we have a bigger problem with the efficacy of the banking system than we imagined. Banks simply do not make mistakes while executing credit or debit entries.

That a demonetization was being contemplated was kept a secret for good reason. But, little was achieved by not keeping even a single RBI official in the loop who could have been consulted on the availability of new currency, printing capacity, readiness of the banking system and other operational procedures. If an RBI official was consulted, then he clearly is not up to the job.

Concerns have been previously raised about the presence of only 8 out of 10 members on the RBI board meeting which approved the demonetization. The RBI Act prescribes 21 board members of which 11 have not been appointed at the moment. Only the number of government appointees is compliant with the RBI Act (at 2). This seriously compromises the independence of the RBI Board. Refusal by the RBI to furnish the minutes of the RBI Board meeting and other information under the RTI has further led to the belief that the RBI has become the opposite of the transparent organization that was hoped with setting up of the MPC, MPC minutes disclosures and an inflation targeting framework. The RTI act mandates that any written record that comes under the RTI and needs to be disclosed if asked for.

The idea of an independent monetary authority is not a very old one. It is a 20th century creation to act as a counterbalance to the populist tendencies of governments. The idea is that if a government is fiscally profligate, an independent central bank will raise interest rates to control inflation thereby maintaining monetary stability in the country. This idea gained worldwide acceptance after inflation wreaked havoc with economies from Germany to Latin America. The RBI governor on behalf of the Government of India is the guarantor who signs on currency notes promising to pay holder. He is the most well informed person on the banking sector in the country. If he had an iota of doubt about the capacity of the banking system to handle the exercise he should have shut the idea down. The prerogative was on him and the RBI board. On the other hand, if they succumbed to pressure from the government, then investors should reconsider India as an investment destination. I would like to direct Dr. Patel to his own brilliant report on monetary policy which argued for an independent MPC and why central banks should have an independent and targeted focus.

The Government announced demonetization in less than two months of Dr. Patel’s appointment as the RBI head. The nation expected him to speak on the announcement, and address the concerns caused by an act of such humongous scale. Dr. Urijit Patel’s silence on a decision, that comes under the realms of the RBI Act, led to wide spread speculation, on both, his stance and consent. Even a single press address by Dr. Patel would have gone a long way in reposing the faith of common man, in the institution that was responsible for implementing the exercise as the banking regulator.

The RBI as the issuer of currency in India and the banking regulator has done an extremely shoddy job of handling the exercise and as it stands, the current leadership has substantially harmed the institutional credibility of a venerated institution. It goes without saying that Dr. Urjit Patel had big shoes to fill. He was well regarded and considered a good fit for the job. Since that veneer has been removed, it is best that the task of restoration of the credibility of the RBI falls to someone else; perhaps Professor Viral Acharya.