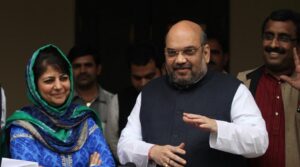 Do the marriage of ideologies and the union of oppositions truly have a beneficial outcome?

It is that time when contesting parties take the road less travelled, appease their voters with dream schemes and manipulate vote share. In the fragmented marketplace, it is monastic to forecast winning two-third of the assembly benches. Thus, coalitions or alliances are born.

Coalitions are permutations born out of arithmetic. They are the modus operandi, in the absence of a clear winner. The first coalition government was led by Morarji Desai in March 1977 which lasted until June 1979. Since then, India has witnessed both natural coalitions (Shiv Sena – BJP) based on similar ideologies and misplaced coalitions (Mufti – BJP). It is based on arithmetic convenience and negotiations.

The one-time natural partners, Shiv Sena and BJP called off their alliance before the Maharashtra elections in 2014. While the two eventually entered into a coalition to form the government, the camaraderie has eroded since then. As the two parties have decided to part ways for BMC elections of 2017, their journey from a natural alliance to a claustrophobic coalition has been unexpected.

The coalition of the BJP-Mufti government in 2016 in J&K was a chalk and cheese coalition. Political analysts do not see this beyond rudimentary arithmetic. The brittle nature of this odd alliance is visible on numerous occasions.

“A Coalition is a low-risk and low-return strategy. Since the parties do not invest in the relationship before polls, they are not obliged to deliver on each other’s manifesto.”

Pre-poll alliances, on the other hand, are aspirational. They are formed by parties that claim to mutually support each other’s ideologies and see eye to eye before the commencement of elections. Alliances avoid pitching opposing candidates, display a joint show of power and leverage on each other’s vote bank. They may be running together for a common cause or against a common enemy. “In politics, common enemies are identified before common friends”, Kumar Ketkar.

The notional credibility of an alliance is comparatively higher than a coalition. When two opposing parties collaborate to pass the test of numbers, voters of either party stand disillusioned. They view the coalition as an arrangement purely political in nature. This triggers an air of scepticism that lingers during the entire term. Coalition members are seen making ideological adjustments, to keep the numbers intact. These alliances do not coalesce solely on the back of mathematics. Alliance members either want to consolidate vote bank and/or unite against a common enemy.

To illustrate a catalyst to victory

BJP won 282 seats and 29.86 percent votes in the 16th Lok Sabha elections in May 2014. Fast forward to November 2015, a pre-poll alliance was formed between Janata Dal (United), Rashtriya Janata Dal, and Indian National Congress (INC), which proved to be decisive. BJP’s vote share fell to 24.42 percent in just eighteen months. One may argue that citizens vote differently in national and state elections. Even if that proposition were to be true, one wonders if the vote share would shift so dramatically, if this was a post-poll coalition than a pre-poll alliance. The cohesive forces are visible as alliance members share the stage to send a resplendent message of unity to voters and opposition alike.

Another recent high-profile pre-poll alliance is the INC SP alliance in UP. This alliance is a realistic leap for the national party and a risk mitigating strategy for the ruling party in the state. The risk of losing loyal supporters and party workers can be mitigated if the two leaders convincingly communicate their underlying intentions and synergy. SP voters who continue to latch on the anti-incumbency of 2014 would dismiss the alliance and even contemplate voting otherwise. INC workers who believe in the stand-alone merit of their cadre call this as a sign of ceding even before an attempt.

Indian politicos are still decoding the rules of an alliance. Currently, alliances are not seen as a marriage of ideologies or a struggle for a sordid cause. They are a coalition based on ‘projected numbers’ at best. With the increase in the number of parties and raised aspirations of regional parties, devices that burnish alliances would need to evolve.

How do alliances overpower coalitions?

Firstly, alliances reduce the number of contesting points in the election polygon. This implicitly reduces the probability of a hung assembly. Odd and desperate coalitions may also be contained through well-designed alliances.

Thirdly, alliances form the basis of future political relationships and help parties expand their base in other regions. In April 1999, BJP lost the vote of confidence in Lok Sabha, by a margin of one vote. This prompted BJP to scout for pan-India partners, which eventually lead to the National Democratic Alliance (NDA) before 1999 elections. Similarly, the proposed Mahagathbandhan may prove a decisive piece in devising politics of tomorrow.

As we inch closer to 2019 elections, the oldest national party has already formed pre-poll alliances in both Bihar and Uttar Pradesh. One cannot help speculate if this is of prognostic importance. Many such amenable alliances are formed in the next 10 state elections due for 2019 Assembly polls. If these alliances deliver in the next two years, PM Modi may have to make new friends and befriend old enemies.