When the social security sector of a nation fails to deliver on its intended purpose, the populace takes up the mantle for social security on itself. The ensuing arrangements are not only sub optimal in providing social security but are also the genesis for a slew of other issues. These new issues emanating from improvised solutions to lack of social security nets, have negative externalities, of such large order and perverse nature, that the original problem is compounded even further.

The make shift arrangements most innate to those not covered by a sparsely available, non-affordable social sector is to have offspring. The point being that in the absence of substantial old age support and other social securities, humans turn to their most carnal instincts and they spawn. They spawn to be assured that when the time comes later in their lives, they always have someone to rely on, to call on, to fulfil the gap, which the social sector could not.

Further, throw into this already pitiful scenario, a dysfunctional and sorely inadequate health infrastructure, lack of education, negligible connectivity, etc. and one will end up with direct implications for child mortality. This causes a risk averse person, outside of the social security net to hedge his bets by having more than the optimal number of children (aka his social security) lest some are sacrificed at the altar of indifference for human lives. The outcome of these ingredients brewing in a cauldron of socially regressive and restive attitudes has the populace spawning a progeny so vast that the kauravasare put to shame (hyperbole, of course).

It comes as no surprise then that those who are most probable to suffer from the perils of life, i.e. the poor, are the most likely to exhibit the tendency to populate in order to overcome the social security handicap.However it is not uncommon or unsurprising to find this tendency in the middle and, in the most severe cases of social security deficit, the higher echelons of society.

With 1 in every 5 Indians living in poverty in 2011-12, 80 per cent of them being in rural India, and abysmally low social security reach till date, India is an adequately ripe playground for the aforementioned forces to intertwine and play-out their mayhem. According to RBI’s report on household finances only 1 in 4 people in the country were engaged in post retirement planning. The insurance statistics fare no better with penetration decreasing from 4.6 per cent in FY ’10 to 2.7 per cent in FY ’16 and the density from USD 47.7 in FY ’11 to 43.2 in FY ’16.

Decades of neglect have meant that the poor and socially backward have relied on their children for securing their future. The two latest rounds of the National Family Health Survey (2005-06 and 2015-16) bares testament to the fact. Figure 1 plots the under five mortality rates across Indian states in 2005-06 against their total fertility rates (TFR) in 2015-16. The statistics are from two different time periods since a change in health, especially mortality conditions is only accounted for into the procreation decisions with a lag. Therefore an improvement in general health conditions leading to an increased probability of children surviving into adulthood will not be immediately considered by the masses making reproductive choices. This is most likely because in a country like India the decision on the number of children desired, is largely arrived at by employing adaptive expectations, derived from interaction with the society. Consequently only after the improved health conditions and reduced child mortality rates have persisted for some time, are they taken in account while deciding the desired number of children.

The positive relationship between TFR and under five mortality rate with a correlation of 0.59 seems sufficiently indicative of the brimming population impact an absentee social sector can have. And the negative externalities of a brimming population although a topic for another day is for anyone, who has ever set foot out of his home in India, to experience. 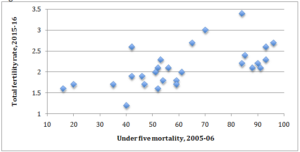 No doubt a lot of other factors are at play here, but this crude exercise still goes on to show how the lack of a social sector can interact with those other factors and lead to a multitude of issues which feedback into the original one.