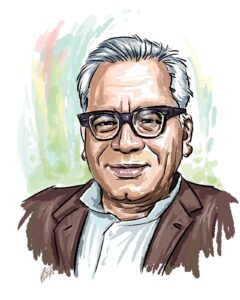 In a bid to entice the economically and/or socially marginalised sections of society, political organisations in India are projecting themselves as champions of inclusive growth, democratic socialism and principled politics. These organisations have scrambled to embrace the remnants of Ram Manohar Lohia’s ideology, generously invoking the visionary thinker, when talking about the future of socialism, or lack thereof.

As every leader projects him or herself as the “Messiah” of the poor and deprived, Lohia’s framework of socialism has gained currency in public speeches. As eminent champions of socialism come together for the espoused Mahagathbandhan, assessing the pragmatic relevance of Lohia’s principles is of great importance to us today.

Lohia is one of the few de-glamourized freedom fighters and original thinkers, whose legacy has survived despite the omnipresence of glossy Nehru history and the iconic views of Gandhi. So what distinctive feature of Lohia’s thoughts tick today? Are his theories being used by the modern Indian politician to transform the public image of parties into one that appeals to the masses?

Evident from Lohia’s thesis topic “Salt Taxation in India,” his views towards economic development were unconventional and assuming. He did not approve of the two dominant economic frameworks—capitalism or communism—because he believed that neither did enough to enable and empower labour. He believed that Marx’s socialist model could not be used in India because the nation followed unique social practices and had distinctive material habits. Indian socialism needed to maintain equidistant relationships from both capitalism and communism to develop a model of its own.

Lohia also deemed the totalitarian model of economics unfit for India. He espoused economic equality and called it a necessity for non-white people. In underdeveloped nations (present third-world nations), inequality was all pervasive, and so, the gulf of inequality was directly proportional to the economic distress of the nation. Sometimes, this gulf grew so wide that the very members of these barren economies were rendered handicapped and muzzled. Unfortunately, the disparity in purchasing power across geographies is a global phenomenon even today. Minimum daily wage in India is INR 160 (~ USD 0.016) compared to USD 58 in the USA (USD 7.25 per hour, assuming 8 hours per day).

Lohia not only advocated the ingenuity of “Satyagraha” and “non-co-operation”, he was also eager to ameliorate his version of Indian socialism with Gandhian values as opposed to the socialism articulated by Nehru, which was influenced by hues of leftism. Although his idea of “humane industrialisation” is obsolete now, he would have been overjoyed to see the indelible mark that India has made in the field of technology and how the world has unconsciously embraced his idea of transfer of technology. Unfortunately, the increasing technological disruptions that have replaced blue-collar jobs and made people increasingly dependent on manmade devices would represent, in Lohia’s mind, the endless lust for individual wealth. He would view this phenomenon as a rise of capitalism which has rendered societies devoid of any spiritualism.

His idea of and for India

Lohia’s apparatus of socialism was not just addressing economic and social disparity; it was equally concerned with character building through spiritualism. Lohia’s ideal India was one that catered to both social and individual reforms, by striking the right balance between materialism and socialism. He strongly postulated India’s inability to achieve any social or economic equality unless social evils including gender discrimination, religion, and communal divide were eliminated. Unfortunately, we find still ourselves living in a fractured social landscape.

India in the modern context

As we look around today, the Indian economy is a vibrant mix of capitalism and communism. The nation has a blend of asset owners inducing healthy competition and accountability. It realises Lohia’s insistence on collective ownership of wealth at village or district level, thereby decentralising ownership from the State, yet not handing over the asset to a single entity.

Veteran socialist, Jayaprakash Narayan had said, “Ram Manohar was very much misunderstood by his contemporaries. Perhaps his ideas were too original to be understood fully while his straightforwardness was unpleasant to many”. Lohia’s novelty will continue to charm Indian thinkers, for each time India is torn between capitalism and communism, the alternative India of Lohia will be relevant and congruent.

Gunja Kapoor is an Associate Fellow at the Pahle India Foundation.