Once confined to specific corners of the world and largely ignored, the 21st century has seen a revival of populism in politics. But where is it headed?

The rise of populism has been one of the broad political themes of the past decade. Till 2000, populism was confined to obscure corners of the world in Latin America and the former Soviet block, and was largely ignored by the developed countries. This revolt of common people against the elite or the “system” is symbolised by Nicolas Maduro and Hugo Chavez in Venezuela, Rodrigo Durete in the Philippines and Recep Tayyip Erdogan in Turkey. In India, the populist wave started in 2011, when Anna Hazare and Arvind Kejriwal led the India Against Corruption movement.

The last time populism was popular across the world was in the 1930s. Over the last few years, it has re-emerged as a major force in the developed world, with the rise of the UK Independence Party, the National Front in France and Podemos in Spain, to give a few examples.

There are a number of similarities between the mid-1930s and current economic conditions – high levels of debt, high levels of central bank debt monetisation, low interest rates and increasing inequality. There are also a number of important differences like better economic conditions, a global liberal consensus and a longer history of democratic institutions. Since most of the classical populists were disdainful of the opposition and curbed press freedom and free speech, while considering the progression of populism, it is important to observe how conflict is being handled in the current context. It is unlikely that the current crop of populists will follow in the footsteps of their predecessors, though it would help to keep history in context to see if the template is followed.

The roots of the current round of populism lie in the economic system which resulted in the financialisation of the economy. The main characteristics of this ‘neoliberal regime’ are globalisation, labour market flexibility and the maximisation of shareholder value. These ideals combined to create a mix of rising inequality (within countries) and a lower labour share of the GDP, which resulted in low economic growth and lower productivity growth – as exposed by Thomas Piketty in his tome Capital in the 21st Century. These trends were exposed by the collapse of the global debt bubble in 2008-09. 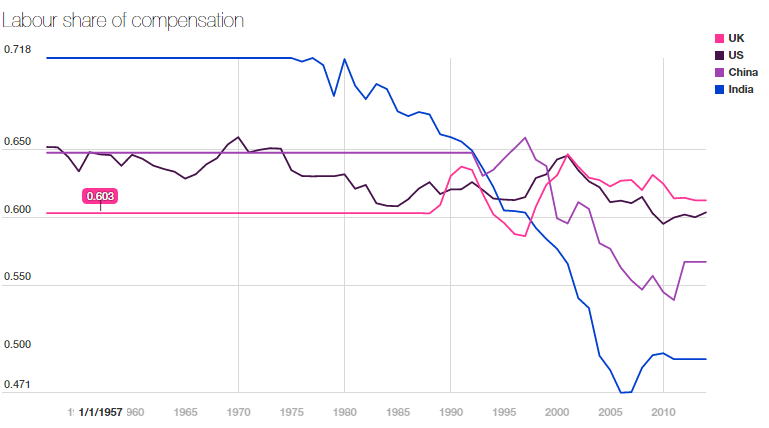 As the citizens of the world realised that the system was dysfunctional and serving capital, not households, they rebelled by choosing populist parties that promised to change the status quo. The impact of globalisation is felt not so much as the movement of labour but more as the free movement of goods and services. This results in lower domestic prices but also reduces domestic demand and production (leading to job loss). In the decades after the Second World War, the state was more paternalistic and managed the masses’ exposure to the market vagaries by providing employment and social security. This contract – that elites keep the power but take care of the masses – is what has broken down in the past three decades. Post the 1980s, states began to pare back their influence on the market. ‘Fiscal prudence’ and ‘small government’ became the buzz words, and governments systematically went about weakening labour unions, “liberalising” labour markets and pulling back on social security, in the belief that competitive markets would emerge for these services, and propagated the idea that government intervention in markets is bad.

Populism is a response to this neoliberalism. The argument that the rise of populism reflects rising social and economic inequalities was first made by Seymour Lipset and Daniel Bell in the 1950s, while studying its rise in the 1920s. Their argument mirrors the modern case that populist support is generally stronger among older people, men, the less educated and religious and ethnic majorities.

The above economic explanation is not completely valid, as populism has also arisen in several of the most egalitarian, best educated and most secure societies in the world like those in Sweden and Denmark. An alternative explanation is a thesis based on cultural backlash. This theory predicts that support for populism will be stronger among those holding traditional cultural values, which mostly comprises the older and less educated groups of the population.

Combining the two theses, Cas Mudde defined populism as a loose set of ideas that share three core beliefs: anti-establishment, authoritarianism and nativism. Here populism emphasises faith in the wisdom and virtue of ordinary people and embraces a resentment against existing authorities. Populists display authoritarian leanings and favour direct democracy via opinion polls and plebiscites rather than institutional checks and balances. Populists come in all shapes and sizes, spanning the economic spectrum (from Vladimir Lenin to Adolf Hitler) and political spectrum (Benito Mussolini to Juan Perón). But they take advantage of a similar set of conditions to gain power.

Populists come to power during sustained weak economic conditions. They take advantage of a policy logjam where consensus is difficult, giving rise to the “need” for a strong leader. They also use increasing inequality, channeling the rage of the masses against the “establishment”. Voters are garnered by using the polarisation brought about by wealth gaps or xenophobia.

On gaining power, populists of the past shared many core beliefs and goals: they always claim to work for the “people”, promote nationalism as a social glue necessary to take difficult steps and have a general disregard for debate and disagreement. In addition, populists almost always follow protectionist economic policies.

Going by past examples, economic growth in the next decade will be determined more by populist policies, not by fiscal and monetary policies as we have grown accustomed to. Classical populist economic policies include protectionism, nationalism, infrastructure building, increased military spending and often capital controls. However, we no longer live in the classical world of the 20th century. The advent of the internet has changed the structure of economies, consequently altering the political economy of populism. In the 20th century, authoritarians tried to control the media to control the narrative. Without exception, press in countries ruled by populist regimes were sponsored and controlled by the state. In the 21st century, the press is countered by spreading so much information that people don’t know what to concentrate on, or by propagating false news whereby trust in the media is eroded. The internet also allows for greater monitoring and control of people.

However, it is hard to see how the values which drove populism in the early years will yield similar results today. The modern template of authoritarian regimes is China. Unfortunately, China does not have an ideology and it only projects economic power. Unlike past populists like Hitler, Lenin, Franklin D. Roosevelt (nazism, communism and socialism respectively) who had a new world vision (decidedly wrong in retrospect but modern when judged by their time), the current crop of populists are revisionists in their outlook, pointing to a better past. Vladimir’s Putin’s Russia looks back to the Soviet (of maybe Czarist) era as a time of Russian greatness; Indian leaders point to a mythical time when India was the proverbial golden bird (pre-Islamic India) or to Vedic times (all knowledge resides in the Vedas).

The success of regimes depends on their economic success. Protectionism and infrastructure building in the future may not create the jobs that they did in the 1930s. Politically speaking, the Chinese will not steal our jobs but robots will. After all, you cannot stop the import of computer algorithms. Populism may be on the rise but it will not last unless it delivers either economic growth or a more equitable income distribution. Since China was the first “modern” populist state, we should see how their political system evolves in the next decade for a glimpse into the future of the world.

Saurabh Roy is a researcher at Pahle India.