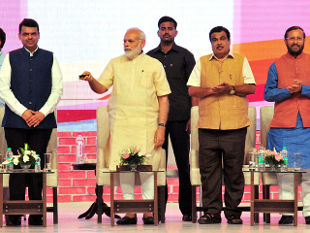 The Narendra Modi government has completed three rather breathless and turbulent years. So much seems to have changed, or has been in a flux. There is no separate railway budget anymore, with the Union Budget itself having been advanced by a month to February 1.

The Reserve Bank of India (RBI) has statutorily mandated to target predetermined inflation rate with an empowered monetary policy committee (MPC). A brand new fiscal responsibility and budget management (FRBM) framework has been set up. The goods and services tax (GST), a historical reform, is on the verge of being rolled out.

A brand new bankruptcy law has been enacted with its rules now being finalised. State utilities have been freed from their debt burden with the introduction of Ujwal Discom Assurance Yojana (UDAY) bonds and solar power generation has been taken to new heights. Highway construction, mired in delays and logjams during the past, has been speeded up significantly.

Breathless, indeed. At the same time, we have the powerful Jan Dhan-Aadhaar-Mobile (JAM) trinity for curbing leakages from government expenditure and improving inclusion. Making e-governance central to the delivery of public services and central government approvals has the potential to significantly bring down delays and rent-seeking in the system.

There are so many new schemes, which, at a recent count, totalled to more than three dozen, with some like Swachh Bharat, Skill India and Digital India being monitored directly by the prime minister himself.

This government has clearly been hyper-busy. It has also not been shy of taking risks, epitomised in some way by the bold decision to demonetise high value currency notes from November 8 to frontally attack the pervasive culture of corruption. The key question now is whether all this hyperactivity has produced the commensurate positive outcomes.

Or has it been too much bluster without the expected substance? As always, the perception about outcomes can be a story of a glass being seen as half-full or half-empty. Yes, the GDP growth rate is the highest in the world for any large economy. But it is lower than the average achieved during 2003-11. The education sector continues to flounder, buffeted as it is by ideological headwinds and bureaucratic confusion. The health sector has not seen much change, let alone improvement.

Agriculture modernisation remains a distant dream, although a beginning has been made with soil cards and promotion of agri-business. Corruption has, admittedly, gone down at the higher levels. But it continues to plague the common man who continues to face demands and threats from the income-tax inspector and from the local policeman. Jihadi terrorism, Naxal violence and Hindu fundamentalism have certainly not subsided. They may have actually worsened. And one can go on in that vein.

So, to repeat the image of the glass once more: is the glass more than half-empty after three years, or more than half-full? The country’s electorate clearly does not think that the glass is more than half-empty. Even as a political economist, I would disagree with those who argue that this government has not met expectations. A strong beginning has been made in challenging entrenched vested interests and corrupt practices. It has also started well in rooting out critical constraints on entrepreneurship, improving governance and establishing a development state in India. Yes, it will take some time before economic growth accelerates further.

We now have to ensure that social dissonance in the Gangetic plains is minimised for India to achieve the double-digit growth that it must if it is to meet the exploding aspirations of the country’s teeming young population.

It would do less than justice to assess the Narendra Modi government based merely on economic growth and job creation. While India today is the world’s fastest-growing large economy, it owes more to China’s slowdown than to any wild acceleration of India’s growth rate. What has been truly transformed under the present government is the economy’s growth potential, thanks to systemic reforms that will have far-reaching impact in the days ahead. The goods and services tax will boost both growth and tax revenues.

Financial inclusion and the combination of Aadhaar and increasingly ubiquitous mobile phones with data connectivity will not just make public finances more efficient but also catalyse entrepreneurship at the bottom of the pyramid.

Political commitment to sanitation will win the battle against intestinal parasites and boost nutrition levels, on the basis of which the new health policy promises to deliver health for all. The Niti Aayog’s framework of rigorous outcome monitoring encourages states to compete in good governance. Allowing market forces to take up the space vacated by subsidy in energy prices, even while vastly raising the share of renewable power in the energy mix,will strengthen energy security and availability. Scrapping state monopoly in coal breaks new reform ground and, once the rules are finalised to commence merchant mining of coal, India will see a boom in mining that will eliminate coal imports, except for coking.

Yet, the political economy of power remains fraught, with state governments yet to learn Gujarat’s lesson on the benefits of making people pay for the power they consume. The government is yet to resolve the legacy problem of banks’ dud loans but the Banks Board Bureau and the latest Ordinance to resolve bad loans are steps in that direction.

A healthy parallel development has been growth in corporate bond issuance. Give me 10 years of social peace to transform this country, the Prime Minister had said, in August 2014. Yet, social peace is at risk, from his oown self-styled supporters. They test the government’s will, three years on, more than the Opposition does.