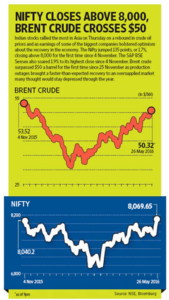 Any explanations for why should Indian stock market indices should be positively correlated to global oil price? As Brent crosses $50 per barrel our NIFTY crosses 8,100. Oil prices are rising because of the decline in shale oil production in the US and the biggest drop in non-OPEC oil production since 1992. Thus it is supply constraint and not a rise in global demand that is driving global oil prices. May make matters worse as large oil importers like China and Japan could see demand contraction as an oil price increase acts effectively as a tax on disposable incomes. Are global growth estimate set to be revised downward again?

For us higher oil price, if it is passed through, would imply higher inflationary pressures. This would rule out further interest rate cuts. At the same time it will being additional pressures on the fiscal balance as the subsidy bill in fertilizer and gas and kerosene will rise. There will also be pressure and rightly so to roll back the excise duty hikes, nine of which were made to mop up Windfall gains accruing to the consumers. Thus, there will be pressure on both the expenditure and revenue streams.

Let’s hope that the Deptt of Economic Affairs (DEA) is ready with a policy response to the emerging scenario. It will be a lazy response to simply now being back the petroleum administrative price mechanism and hold back the necessary rise in market prices of petroleum products as that will simply raise the subsidies volume and will be back to square one.

It would have been useful at this stage for the PM to have the benefit of his Economic Advisory Council as that would have given him independent and objective inputs without being rushed from one fire fighting to another.

Clearly, the days of easy policy making are over. We now need some more initiative and imagination and focus in North Block.