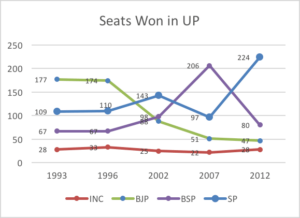 Battle lines have been drawn in Uttar Pradesh, as the regional heavyweights and national stalwarts face off against each other in February 2017.

In May 2014, after the 16th Lok Sabha elections, a prominent national daily published an article titled, ‘Regional parties in Uttar Pradesh and Bihar have gone voiceless’. It seemed appropriate at the time since BJP had swept the elections, on the back of the Modi wave. Historically, Uttar Pradesh, the most coveted state, has made things tough for national parties. With 80 MPs in the Lower House and 403 State Assembly seats, the state attracts politicians across parties, who test their fortunes and attempt to make inroads into Lutyens’ Delhi.

Eight out of fourteen Prime Ministers of India were associated with the state in one form or another.

Eight out of fourteen Prime Ministers of India were associated with the state in one form or another. Narendra Modi, who has never had any personal or political connect with UP, chose Varanasi as his battleground when he contested the 2014 Lok Sabha elections. One is still unsure what lured Narendra Modi to Varanasi, except for the saying, “All roads to Delhi go through UP”. It is interesting, that while he enjoyed massive popularity across the nation, he was unsure of a clear victory in Varanasi. Why else did he contest from his constituency in Gujarat too?

Due to the political opportunities and the vast electorate, UP has always grabbed eyeballs. Typically, the battle is among four parties – the key national parties, BJP and INC and the state parties, SP (Samajwadi Party) and BSP (Bahujan Samaj Party), with the latter two putting up a strong fight.

“In the past twenty years, this battle has seen a shift of power, from the national players to the key state players.”

Total % Votes in the Elections

Regional players are able to identify captive vote banks based on specific castes and communities. They can instantly establish local connections. Voters, characterised by weak socio-economic indicators, are usually inclined to support those who promise them basic needs like “sadak, bijli, paani, rozgaar”. It would be incorrect to say that national parties do not identify caste-based vote banks. However, they fail to bring the rural touch that galvanises voters in remote corners. When Mayawati promises to build a well to solve water shortage, she is addressing an operational issue. When Modi promises overall development, it becomes a more abstract concept.

SP and BSP: A well-defined and consistent narrative

The SP and BSP have a visible and well-defined centre of power. The voters see, read, and hear about these leaders almost on a daily basis; a missing piece in the context of national leaders. Voters in UP, not only track their leaders up close and personal, they also keep them on their toes. When a Badayun or Dadri occurs, both the CM and Mayawati are busy making their voices heard, unlike national leaders who make one speech and fly back to Delhi. Compensating families, who suffered during the 50-day demonetization exercise, was Akhilesh Yadav’s way of communicating his preferential treatment for UP citizens.

Unlike national parties, that field different candidates, and shift responsibilities time and again, SP and BSP provide consistency to voters, both in terms of candidature and electoral narrative. Mayawati and Akhilesh, both were endorsed at the beginning of their careers by their mentors, Kanshi Raam, and Mulayam respectively. While the current struggle within SP points in a different direction, both these parties have historically provided an ideological continuity to voters since close family and associates occupy key positions.

The political risks of creating a vote bank

The INC and BJP, while campaigning in UP, remain wary of the impact their election narrative may cause in other states. This prevents them from speaking on sensitive issues that might have been triggered by their own local activists. When the BJP talks about Ayodhya, it risks losing its Dalit audience who claim they are not even permitted entry inside temples. On the other hand, when it fields a Dalit candidate, it can no longer be a Brahmin’s party of choice. On the other hand, BSP makes no bones about being a pro-Dalit party and SP publicly declares its compassion for minorities and OBCs.

On the other hand, BSP makes no bones about being a pro-Dalit party and SP publicly declares its compassion for minorities and OBCs.

With most touting the current UP elections as the Prime Minister’s 2.5-year performance report, it will also be the bellwether to 2019. Will national parties break the jinx in 2017 or will the SP-BSP local cadre walk away with the trophy? Will BJP’s lust for power in UP force it into another coalition and play the second fiddle like in Jammu and Kashmir? Will INC seal the deal with Akhilesh, as a final resort? Ultimately, it is a matter of whose rhetoric convinces the voters more, for clearly, UP voters matter.