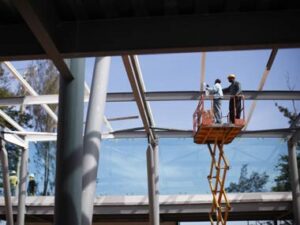 Since the Reserve Bank of India released its discussion paper on Wholesale and Long-Term Finance Banks (WLTF), much ink has been spilt over how it is much needed or how it has been tried before with ICICI, IDBI, IDFC etc. and failed. India’s infrastructure is generally accepted as inadequate and inefficient. India could do with sizeable investments in power, roads, railways, public transport and a hundred other basic infrastructure projects. Finance Minister Arun Jaitley had pegged the required investment over the next 10 years at $1.5 trillion; about 75 percent of India’s 2016 GDP.

Why can’t banks handle the lending?

The RBI discussion paper states that there is a declining trend in bank credit towards services, industrial and small and medium enterprises. This decline is attributed to the asset quality on banks’ balance sheets. The RBI has twisted itself into a knot here by acknowledging that the problem is the NPAs on bank balance sheets and not an unwillingness to lend.

There are several reasons why the new differentiated bank license is being considered.

a. Creating Wholesale and Long-Term Finance banks will create an additional source of long-term financing for small, medium and large businesses and the infrastructure sector but one wonders that the same would be true if the RBI just issued a new banking license.

b.WLTF banks could liven up things in the debt and equity markets by playing market makers for products in this space. However, considering that banks and NBFCs are already doing this, what value is being added here?

c.WLTF could help ease the pressure on banks now stuck with long-term loans and NPAs. A new bank too would have zero NPAs!

d.Expertise in project appraisal and credit monitoring is also cited as a benefit for setting up specialised banks but if this were true, it implies that the current bank credit appraisal and procedures are wrong which would mean that both banks and RBI as their regulators have been doing a very bad job for the past eight decades!

The RBI note does say that WLTF banks may

a. find it tough to raise long-term funds

b. have to raise funds at uneconomic costs

c. not get bankable big companies to fund since they may find it cheaper to raise money on their own

e. face the possibility of bad loans when they lend

The first two are the exact reasons that the previous avatar of WLTF banks i.e. development finance institutions went out of business or converted themselves to banks. While the last two are the exact reasons that are given as a justification for the need for WLTF banks instead of banks lending to infrastructure. There is no innovation in setting up an institution to borrow from the market and lend to infrastructure projects. NBFCs and banks do the same thing at a lower cost. It only forces infrastructure lending because other investment avenues are closed (similar to pension and insurance funds being closed from lending to infrastructure), thus creating multiple pools of capital none of which benefit from diversification. This would also sow the seeds of a future crisis by actively creating a concentrated lending portfolio.

Before 1991, infrastructure was financed mainly by the government; after the crisis in 1990, the government embarked on a path towards fiscal responsibility and private investment flowed into telecommunications, power, roads and airports among others. The government now believes that it does not have the resources to meet all of India’s infrastructure requirements and hence it has tried to attract private capital, promoting PPP in highways, roads, and airports among others.

If any project is thought of independently, it can be financed by either debt, equity or a mix of the two. The tax benefit afforded to debt capital (tax-deductibility of interest payments) creates an incentive to leverage as much as possible so as to pay the least possible tax in the future and also to get the highest return on equity. Companies would build projects with 100 percent debt if banks allowed them, but the standard for infrastructure projects is an 80-20 debt to equity ratio.

The point to note here is that if the investment is financed by debt it has a higher probability of default. Governments are able to borrow much more cheaply than private companies and this difference in cost of funds increases further because infrastructure is executed via special purpose vehicles to protect the private companies from project liabilities. The lack of credit history and high leverage of these vehicles raises the cost of debt even further.

India has a fairly high savings rate of 31.6 percent of GDP of which almost 60 percent is household savings. Of these savings, 40 percent are in financial assets. Financial savings comprise of currency, deposits, shares and debentures, insurance funds, pension and provident funds and claims on government. Of the financial savings, 57 percent are in cash and deposits, leaving only a small portion of savings in contractual/long term savings. The main issue here for India is not the unavailability of funds for lending but the composition of savings and financial intermediation to channel available savings into infrastructure investment.

Restrictions on pension and insurance companies

To fund infrastructure projects with long gestation periods, companies need access to long term funds. Globally long-term capital is raised via capital markets where the major investors are pension and insurance managers. In India, these managers are severely constrained by regulations. For instance,

d. Pension funds in India usually invest in government securities, AAA rated papers or AA rated papers of financial institutions. This is an extremely conservative approach and limits the returns for investors while restricting flow of credit into the broader economy.

Such restrictions along with weak enforcement of bankruptcy and extremely long litigation times have stunted the growth of a bond market in India. Insurance, pension companies and debt mutual funds are heavily invested in government securities, a classic case of crowding out. Masala bonds and foreign borrowing are a source but to a limited extent as external borrowing is subject to macro-stability restrictions of the RBI.

The real issues faced by infrastructure projects relate to clearances and land acquisition which are governance issues rather than banking. The inability to secure land, environmental, municipal and various other approvals in time has led to many infrastructure projects choking up bank balance sheets. Creating more financing institutions will surely increase the supply of credit but that does not guarantee project viability. If governance is not improved, funds lent out today will in the future become NPAs like the ones choking the banks today.

It has been put forward that establishment of WLTF banks will enhance competition, which will lead to more efficient allocation of financial resources. But if this is true, RBI should have given out more than two banking licenses it gave out in 2014. The NBFC-bank-insurance-pension structure is good enough to lend to infrastructure and new “specialized banks” won’t add anything but a new complication to the system and a new source of risk. Only the real estate/infrastructure sector has to slow down for these WLTF banks to collapse. Banks on the other hand have more diverse lending books and can survive downturn in one specific sector. The RBI should focus on working with various regulators to ease the flow of funds rather creating future sources of systemic risk.